Among the top highest paid Youtube stars of 2020, Rhett and Link secured the 4th rank with the whooping 20 million dollars earned last year.

The self-styled “Internetainers” (portmanteau of “Internet” and “entertainers”) and their channels has been a frequent acquaintance of the Youtube trending page.

All due to the pair’s multi talents. You name it, they probably did it. From Youtubers to actors, comedians, hosts, musicians, writers, filmmakers, etc.

But being gifted alone can’t bring Rhett and Link the Youtube views and subscribers of 1.9 billion and 41.8 million respectively. There gotta be some sort of secret up the duo’s sleeves in order to get to where they are today.

No worry, all your questions will soon be answered in this article, as part of the series about the top paid Youtube creators of 2020. So let’s go!

Both got caught scribbling naughty words on their desks. Details of the profanity are lost to time and foggy memories. But as punishment, the boys’ teacher, Ms Miss Lenora Locklear, had them stay inside and color unicorns during recess,

This is the moment that brought Rhett and Link together as they compared notes on how to draw supernatural animals. They spent a lot of their childhood embarking on one creative venture after another ever since.

This friendship continued through high school and university. Their most noteworthy collaborative projects during this time included a screenplay, a parody film, and a punk rock band known as “The Wax Paper Dogz”.

In fact, the duo will eventually bring up the unfinished screenplay again in their later Youtube videos.

Despite their true passion in film and video, neither chose film school when college came. They had practical sides, so they chose engineering at N.C. State University, where they shared the same dorm room for four years.

During this time, Rhett and Link found their outlet shooting videos and performed comedy sketches for a religious organization called Campus Crusade for Christ.

Rhett and Link are in the position of having built their loyal following over the course of 15 years and more than 1,900 videos.

But it’s more than just sticking around long enough to gain traction. Rhett and Link have been steadily diversifying their offerings to nearly a fault of arbitrariness that has made them one of YouTube’s most-subscribed creators.

Shortly after graduating they both quit their new-found engineering jobs to focus on full time Youtube video production.

After the initial success of these videos, Rhett and Link went on to create several more free web commercials for local businesses across the USA, nominated by users on their website. 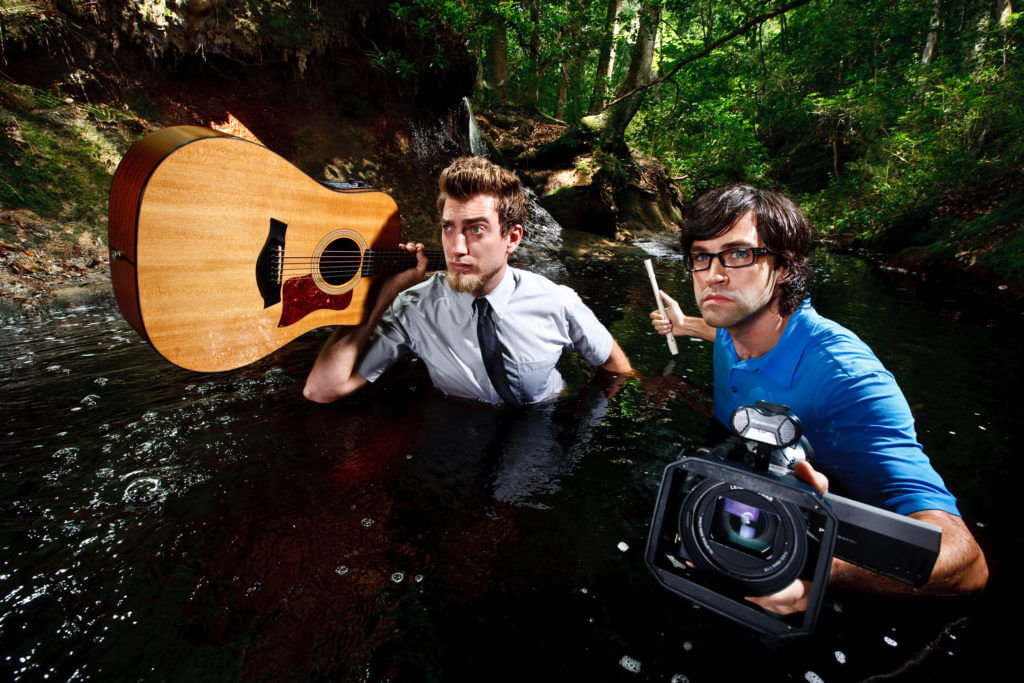 The series of web videos soon went viral and garnered the attention of major advertising publications such as Advertising Age and AdWeek. Their commercials were featured on CNN, NPR, The New York Times, Forbes, and TMZ as well

The success of the series also landed Rhett and Link a TV show, Rhett & Link: Commercial Kings. They were also hired by big name companies such as Taco Bell, Cadillac and Alka-Seltzer to create branded entertainment web videos.

Aside from the web commercials, Rhett and Link also built their audience by sharing comedy sketches and parody music videos.

The Good Mythical Morning and the expansion 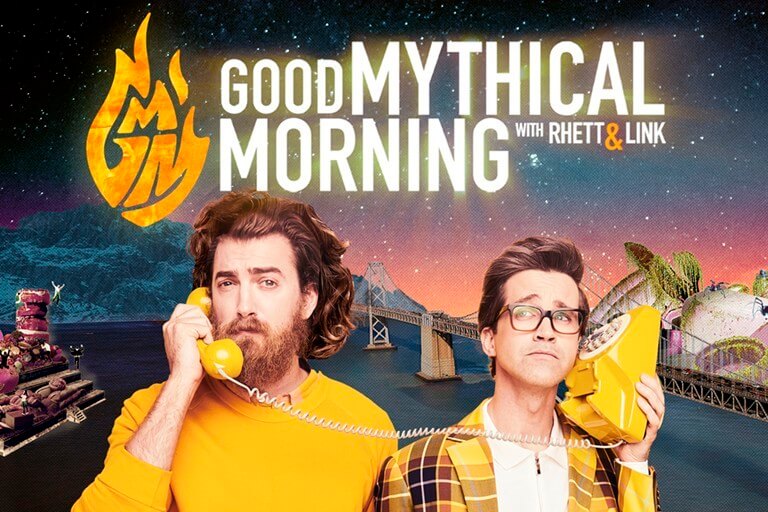 The Good Mythical Morning and the expansion

After moving their base to Los Angeles, California while making the Rhett & Link: Commercial Kings show, the duo added a new element to their entertainment career.

They ended the GMCL show after 40 episodes. And Good Mythical Morning was launched the following year on January 9, 2012.

Each GMM episode would open with Rhett and Link giving a brief description of the topic for the day, a fan-submitted intro saying “let’s talk about that”, the theme song, and then a hilarious story or personal occurrence that happened to either of the co-hosts.

At the end of each episode, Rhett or Link began the practice of spinning the Wheel of Mythicality and would act out a fan-submitted skit or scene based on the wheel’s decision.

These routines will stay the same throughout the show’s progression, as Rhett and Link introduced several changes in content, format and layout.

For example, in the fourth season, the “Taste Test” series was commended, where Rhett and Link try out several odd, unconventional ingredients.

This was soon followed by the well-known “Will it?” series, where the hosts try and invent different varieties of a famous type of food with unusual and often increasing levels of disgusting ingredients.

By the ninth season, GMM dissolved the traditional talk show layout, replacing it with full-fledged comedy, games, challenges and food-based endeavors to appease the audience and generate an increased comedic response.

During the beginning of season 12, the duo decided to release two to four-part episodes of GMM each day, allowing for more content, and ultimately more Youtube views.

In season 14 the traditional layout returned with a new Saturday show called Let’s Talk About That, where producer Stevie Levine shows behind the scenes footage of GMM and plays games with Rhett and Link based on a previous episode of GMM from the week.

The expansion of Rhett and Link 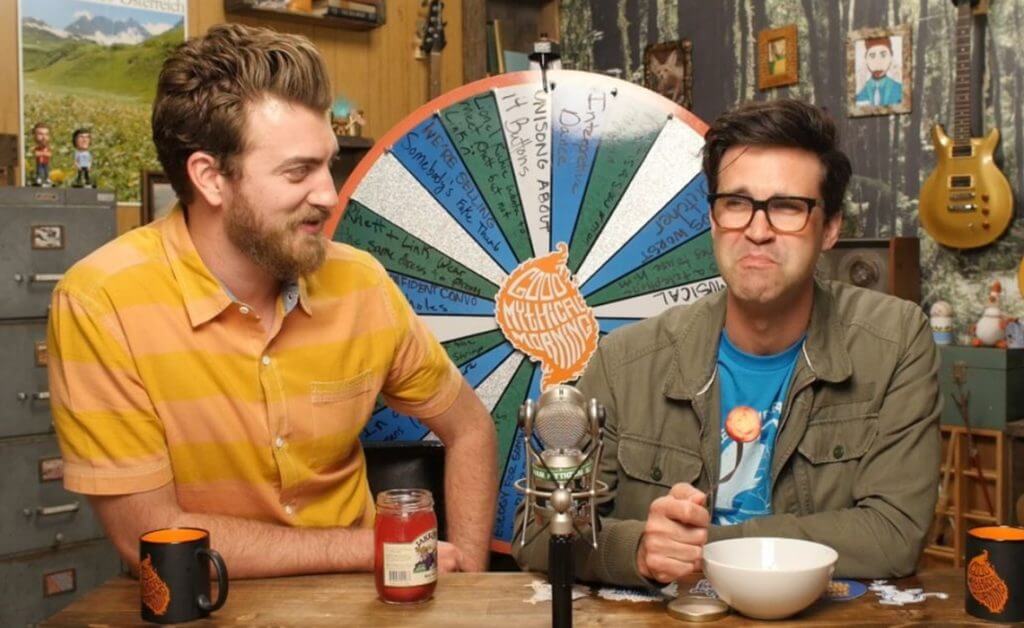 The expansion of Rhett and Link

Due to the wild success of this show, Rhett and Link have spent the next few years focusing solely on GMM and other content that supports it. In fact, the duo even changed the name of their production company to “Rhett & Link, Inc.” to “Mythical Entertainment” in 2017.

Good Mythical Morning has blossomed into several other spin-off shows and channels, including the aforementioned Let’s Talk About That.

The series, debuted on April 25, 2013 on the couple’s second channel, existed as a variety show, combining the comedy of both their main Rhett and Link channel content with a hosting style similar to GMM.

Each episode contained a multitude of shorter videos starring Rhett & Link with other actors and YouTube personalities as guests.

Moreover, they also published individual segments of The Mythical Show as standalone videos on the main Rhett & Link channel. However, the Mythical Show ended July 11, 2013 after 12 episodes. 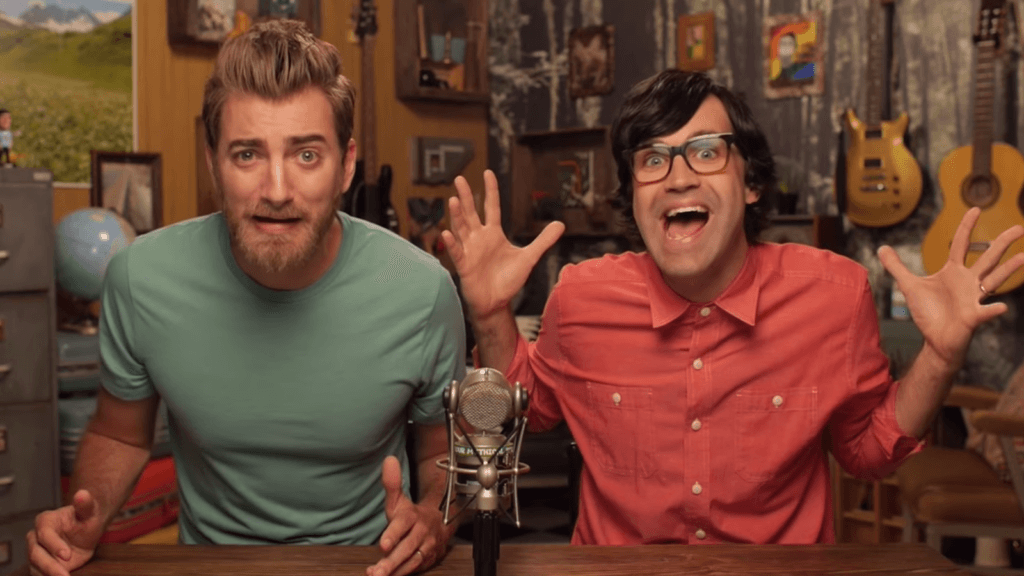 This after-show extends the game or conservation of the main episode, allowing viewers to enjoy a raw, unfiltered GMM, which often lacks within the main show.

This ongoing series has runned from January 2014 until now with more than 1000 episodes. Each episode is released along with the GMM episodes.

On March 20, 2017, Mythical Entertainment announced their new Youtube channel, This Is Mythical. It contains several series such as:

In March 2018, the channel was rebranded with its new name simply being “Mythical”.

On December 20, 2019, another channel-Mythical Kitchen-was announced. The channel is a hub for all food featured videos, and it is run by the Mythical Chefs, Josh Scherer, Nicole Hendizadeh, and Trevor Evarts.

It contains several series such as: “Fancy Fast Food”, which takes famous fast food items to the next level and “Snack Smash,” a food series that combines two snacks to create one creative concoction.

The GMM show, as a whole, continues to implement “mythicality” and reminds viewers daily that curiosity, tomfoolery, and fun can add zest to a person’s life, and teaches that growing up should not limit your creativity and willingness for adventure.

So what exactly is the secret behind Rhett and Link’s success? Is it because of the Mythical team of producers, writers, editors, designers, behind the duo? Or is it because of something else?

The answer to that is surprisingly simple: find the intersection of what the audience likes, what the pair like and what they know about the internet in general.

To Rhett and Link, it’s important to keep the spirit of innovation and originality that characterized their content from the early days. That’s what made them one of YouTube’s most-subscribed creators.

Want to know more tips on how to grow a successful Youtube channel? Sign up to AudienceGain right away!

Just so you know, buying a Facebook page is a thing.  No wonder, Facebook is the most popular social media platform in the world after...

A complete guide on how to buy TikTok account – all you need to know!

With the rise of TikTok, comes the popularity of the concept of buying TikTok accounts. TikTok has managed to surpass Instagram as the second-hot-favorite social...

To buy YouTube watch hours is no longer a strange question to any YouTuber recently. It has become a popular way to gain monetization rights...