Dude Perfect – from fun to money!

Amidst the Coronavirus pandemic, when all of which amounts to a dearth of sports content at a time, people who are stuck at home and practicing social distancing, need content more than ever.

They contribute to the one billion hours of YouTube consumed each day—a number that is likely to increase the longer are the lockdown.

It is during this time that Dude Perfect channel became the main source entertainment for many sport fans. One team member even mentioned fans demanding for more videos once the virus started up.

Who would have thought having fun with your friends and your passion can gain you so many views and subscribers on Youtube?

For that reason, today we will talk about Dude Perfect and their incredible success story.

What is trick shot videos 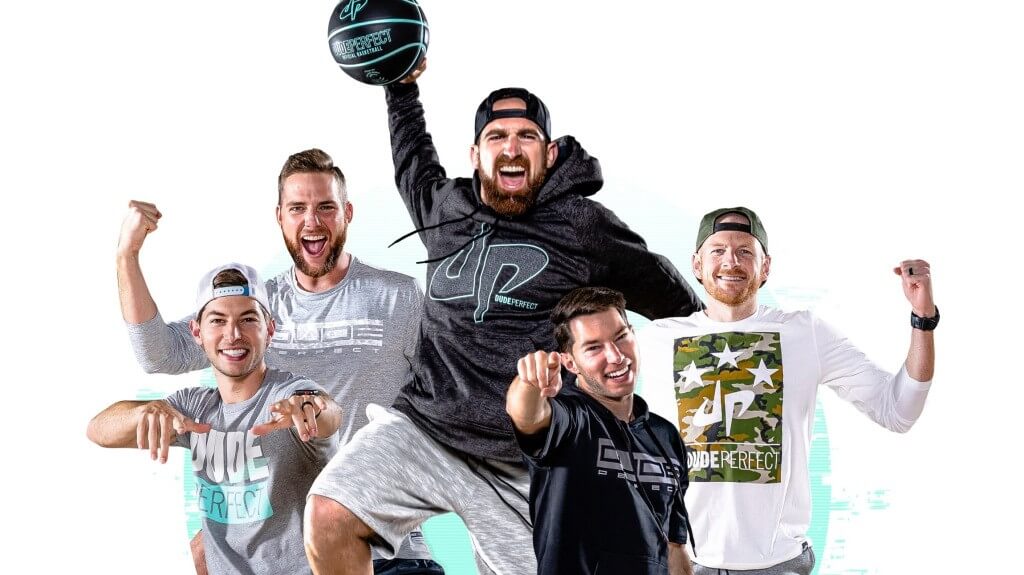 To start with, we need to know what the hell is the channel’s niche that makes them so popular among Youtube viewers.

Well, if you google ‘trick shot’, the first result you will see is a definition of trick shot in billiards.

“A trick shot (also trickshot or trick-shot) is a shot played on a billiards table, which seems unlikely or impossible or requires significant skill.”

Sure, this is not the exact definition of trick shot video per se. However, it captures the essence of the trick shot niche on Youtube perfectly.

And it’s not limited to billiards either, as long as the stunt is seemingly impossible and requires lots and lots of skill, no matter what sport you play, what game you do, it is a trick shot.

For example, when you throw a football off the top level of a sports stadium toward a basketball hoop on the field, you don’t expect it to go in. But after much practice and many tries, you succeed, and capture that on camera as well.

And voila! That’s the recipe for a million view videos right there (Sure enough, Dude Perfect followed the exact same thing, and it launched them to the stardom as we know them today).

As a result, Dude Perfect pretty much owns the online space dedicated to spectacular trick shot videos. For that reason, let’s see how the team achieves their spectacular fame and profit. 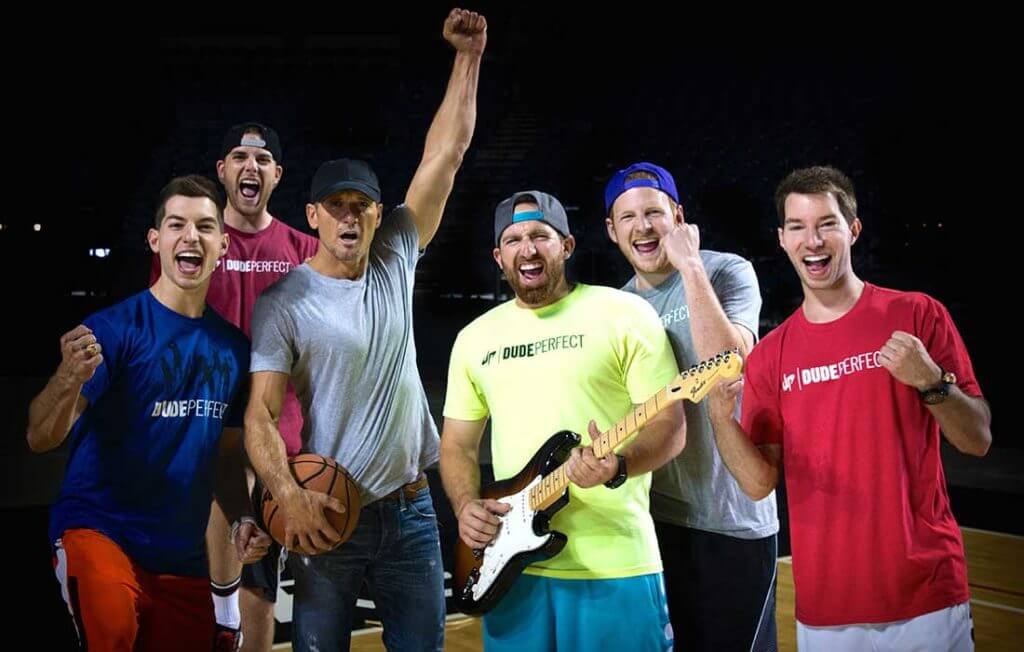 Dude Perfect is made up of 5 best friends who met while in college at Texas A&M University. Their names are Coby and Cory Cotton, Garrett Hilbert, Cody Jones, and Tyler Toney.

At college, they became friends through their love of sports and their faith. They enjoyed spending time with each other so much that they all became roommates.

The idea for the team’s very first video came out of boredom. More specifically, when they procrastinated and tried to think of anything other than studying for finals.

The guys started to bet sandwiches that they could make a trick basketball shot. As Cotton said “We decided to try to throw this hook shot over a tree and into a basket.”

Next, they grabbed a camera and recorded every trick shot they made with a basketball. All of which are insanely hard to perform, at least to average viewers. But somehow, the guys nailed it.

An interesting trivia for you though: the name “Dude Perfect” comes from the gleeful shouts they’d make when they canned a shot. Little do you know!

On April 9, 2009, the video of the group performing trick shots at Tyler Toney’s ranch was released on YouTube.

Surprisingly, the video, with all noise and giddy enthusiasm plus a background song of a garage band, exploded. Within a week, the video received 200,000 views!

More than just views and subscribers that they gained, the video even got the attention of the mainstream media as Good Morning America interviewed the five faces behind the viral video.

Being the very first of its kind, the video paved the way for the Dude Perfect team to establish their Youtube channel and become the household name among sport enthusiasts.

Shortly after the very first video, Dude Perfect brought things to a whole new level, growing to a multinational sports entertainment with various kinds of content other than just trick shots and stunts.

Subsequently, a trick shot video from the Christian summer camp Sky Ranch was released, which, as of January 2021, has over 20 million views.

For every 100,000 views the video received, Dude Perfect pledged to sponsor a child from Compassion International Afterwards. 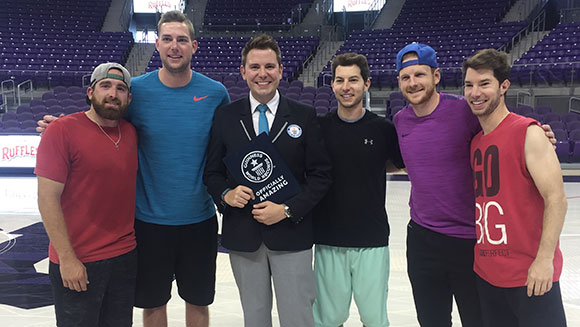 After the Sky Ranch video went viral, ESPN’s E:60 contacted the group for a segment. This is when Dude Perfect worked their magic and created a world record.

The tipping point came when Texas A&M allowed them to film in Kyle Stadium. They set the world record for the longest basketball shot from the third floor of Texas A&M’s Kyle Field, which traveled 3.9 seconds after Tony converted it

The shot prompted television appearances on ESPN’s First Take, Yahoo! Sports, as well as several other sport shows like Pardon the Interruption, Around the Horn and Sports Nation.

Eventually, Dude Perfect introduced the infamous Panda mascot in 2010, which “developed a cult following at A&M basketball games” when taunting players of the opposing team.

In March 2011, Dude Perfect unofficially extended the record with a shot from the top of Reliant Stadium, which lasted 5.3 seconds.

And in 2014, the group successfully attempted a shot from the 561 ft (171 m)-high Reunion Tower, with Jones and Hilbert holding the basket at the base of the tower.

The Dude Perfect team had gone a long way from college kids avoiding studying to nationally-famous tricksters. And things can only get better for the five guys.

The team have received professional endorsements and requests, which began with the then-Sacramento Kings player Tyreke Evans, in an effort to promote Evans’ run for Rookie of the Year.

In 2016, Dude Perfect traveled to the United Kingdom to film a video with players of famous football clubs like Manchester City, Arsenal and Chelsea.

Actor Zac Efron also appeared in Dude Perfect 4th All Sports Golf Battle, which was released in 2020 but pre-recorded in 2019. He finished 3rd in the finale.

Starting off doing “trick shot” videos using sport equipment and random household items, the boys went on branching out to other kinds of content.

This resulted in three long running series on the Dude Perfect channel.

The Stereotypes series is where the dudes act out the stereotypes of different subjects. The “Rage Monster” stereotype appears in every Stereotypes video and is portrayed by Tyler. The Rage Monster usually screams and destroys objects, and mainly rages at Cody.

Dude Perfect also does a battle series where all five of them compete for the win in various challenges revolving around a certain sport or game.

The videos usually consist of them attempting to meet a certain goal and the winner receives a custom made trophy, usually painted with gold spray paint.

Tyler has developed a reputation of dominating in Battles and winning most of the time.

In these Face-Off videos, the Dude Perfect members draw two people to Face-Off in a contest and a sideline announcer to commentate. The commentator is usually portrayed in a comedic sense, with an outlandish outfit and personality.

Coby is the most successful member of the group in regards to Face-Offs; he has competed in 8 Face-Offs and won 7 of them. By contrast, Cory is the least successful, being winless in his 8 Face-Offs.

What a remarkable journey these five guys have made for themselves. Who would have thought it all started with basketball shots and sandwich betting.

Overall, Dude Perfect ranks as the 13th most subscribed channel on YouTube with over 50 million subscribers. The team being listed in the top Youtube earners of 2020 is a solid proof for the guys’ achievement.

Their popularity can only grow bigger, especially during this Covid-19 pandemic. Let’s hope for the team’s future success then!

In the meantime, don’t miss out on the latest articles on all things Youtube and sign up to AudienceGain!